How it came in existence....
The sight of a truck loaded with garbage and two workers sitting atop it,eating their lunch, was what moved Milind Ranade into finding out about where they were headed and more about their situation.Trucks and workers would congregate either at roadsides across the city while loading the trucks with garbage or at the landfill sites when unloading them. Talking to them about the importance of coming together to form a union was one of the first steps of what later came to be known as KVSS.

These workers spent a large part of their day working in the midst of garbage, since they were paid on the basis of the number of trips that they made from a designated part of the city to the landfill site. Certain municipal wards being more than 20 km from the dumping site, the pressure was on the workers to hurriedly load the truck and complete a trip.  Milind Ranade spent almost ten months travelling in the driver’s cabin of rickety trucks and at the dumping site, talking to whichever workers he met about the importance of union formation. 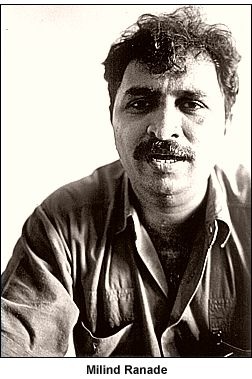 http://proxied.changemakers.net/studio/02july/kishore4.cfm
Milind Ranade is a native of Maharashtra, the home of India's labor movement, and he has been thinking about workers' rights since childhood. As a boy, he was inspired by his grandfather, who was a political activist, and his mother, a schoolteacher who helped local workers organize. He vividly recalls his first contact with a member of the untouchable caste: "As a child, I was told not to touch electric points because I would get a shock," he said. "For a four-year-old this fell under the realm of 'forbidden' things.

"In my village – at that time I was unaware of my own caste – there was a dalit caste called Mahar. They were regarded as the lowest of the low. Another child of the village told me, 'Don't touch them.'

"I thought, 'Why not, will I get a shock if I touch them?' I was intensely curious, so one day I decided to risk it, and I touched the hand of an old Mahar woman as I took some change from her. She immediately jerked back her hand, but I had felt no shock!

"I told my grandmother about it – why had I felt no shock though I had touched a forbidden thing? She just laughed, and told me, 'No, one doesn't get a shock from touching them, but don't tell anyone else in the family about this.' That's all she said. She didn't sound shocked; she didn't order me to go have a bath. Just: don't tell anyone else.

Ranade was introduced to labor politics as a boy. He recalls that "in 1973, there was a terrible food shortage. In those days I used to accompany my father and mother to a number of meetings. At one such meeting, I heard S. C. Dange give a speech. The talk at the time was that the famine was manmade, not natural, and so on. I was very impressed by his speech. He spoke for half an hour, and I remember coming home and repeating his words to my family. After that, I would make it a point to listen to him speak.

There was an industrial strike. At that time, many rallies would take place, and I would go to hear Dange. He used such simple, easy language. I would watch him attentively. His way of talking, the manner in which he presented himself, his attitude, his posture, it all affected me greatly. Gradually, I felt a change inside myself.

"I was very impressed by what he said. I must have been around 11 or 12 years old at the time. I remember when he announced this: it was at a huge rally, with some 25,000 people present. He said, 'If anyone is angry with this decision, if you want to throw stones, aim at me, because I am responsible.'

"He asked, 'Who amongst you does not wish to end the strike, raise your hands.' Only ten people or so raised their hands. The courage of Dange and the workers touched my heart."

Ranade worked at a textile mill until riots between Hindus and Muslims broke out in Bombay in 1991, when he resigned to set up the Dharavi Rashtriya Ekta Samiti, an organization devoted to communal harmony in one of Bombay's most contentious slums. For this he won the Rajeev Gandhi Award for Excellence.

Five years later a new phase of advocacy began for India's urban poor when Ranade launched KVSS. Today he lives in Bombay with his father, his wife, who is a college lecturer, and their ten-year old daughter.

Milind Ranade's life was changed one day while riding a local bus when he noticed a man who was eating while sitting on top of a passing garbage truck. Shock and fascination led Ranade and two friends to follow the truck to the Shivajinagar dumping ground. "I remember the date," he says, "December 6th, 1996. My bus was passing a truck, and we all had to cover our noses, there was such a stench coming from the truck. It was a kachada gadi carrying waste and sewage. I was riding on the top of a double decker, and through the window I saw three people on that truck, in the midst of that unbearable stink – in which it was impossible to breathe, let alone sit. "They were eating their meal. I couldn't eat that day. I was so disturbed, I talked about this to many people. I spoke with an old comrade, Limaye. He told us to find out who they were.

"The next day we followed them in a bus that was behind the truck, and we reached a village called Devlar. There we saw – not one or two – but hundreds of trucks, each being boarded by similar people. We asked about them, and were told they were contract laborers. At that time, they were experiencing a water shortage, and being forced to buy water at 5 rupees per gallon. There was no accommodation for them, nor would any buses agree to carry them because of the stench of the waste with which they worked. So they were forced to ride the trucks, sitting on the kachada.

"We would visit them, and watch as they worked. They had no time to talk to us as they were paid on a per-trip basis. Given the traffic problem in Bombay, there was much wastage of time in traffic jams. In order to make three trips up and down, they had to work 10-12 hours, sometimes as much as 14 hours." 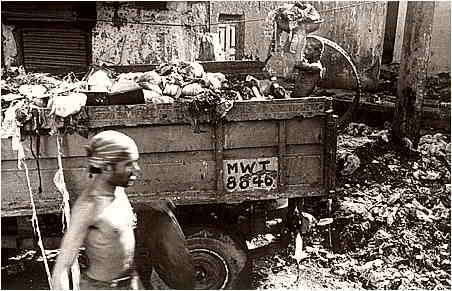 Organizing on the Bottom Rung

Social workers usually try to help waste collectors by advising them to find other jobs. Instead, Ranade approached them as a community organizer who encouraged them to fight for their constitutional rights as workers, and to be fully participating members of society. The waste collectors had been shunned by mainstream labor unions and even the BMC refused to respond to their inquiries. "No one would respond to any attempts at communication," Ranade said. "Years of mechanized work in a hazardous environment had made them as unresponsive as silent walls." Most waste collectors are illiterate migrants who cannot speak the language of the cities where they work.

"We tried to organize them," Ranade continued. "Three of us – Shivaji Pawar, a textile worker, Jamha Gowker, a victimized worker, and myself – would reach the dumping ground in the early morning. Whenever a truck halted there, we would talk to the workers, even for a minute at a time. Even though most of the trucks never halted there, we would still visit regularly.

"After some days, we started going to the spot where they unloaded the garbage. It took 15-20 minutes to unload a truck. We tried to approach them during that time. But those workers were not ready to talk to us.

"Over the next 15 days we would go there regularly and ask them their names and the locality in which they lived, but their lips were sealed. It was like talking to a stone wall – but we were determined not to be disheartened and to keep trying. After all, they had the right to be angry with us; to refuse to talk to us. What had we ever done for them? This system had been in place for 18 years, but we had paid no attention to them in all this time.

So we persisted, and one day, we were rewarded. As we showed a fist of solidarity, one of the workers returned the gesture. We rushed over to talk to him."
Ranade spent about nine months observing the waste collectors' lives. At first, he overcame their reticence by communicating in simple sign language. His daily effort eroded their hostility and gradually earned their trust. "This only meant I could travel with them on garbage trucks," he recalls.

Over the next six months, Ranade talked with the workers about their working conditions and basic rights. He visited Bombay's dumping grounds by day, and by night conducted informal meetings in wards that sent waste to the Shivajinagar dumping ground. 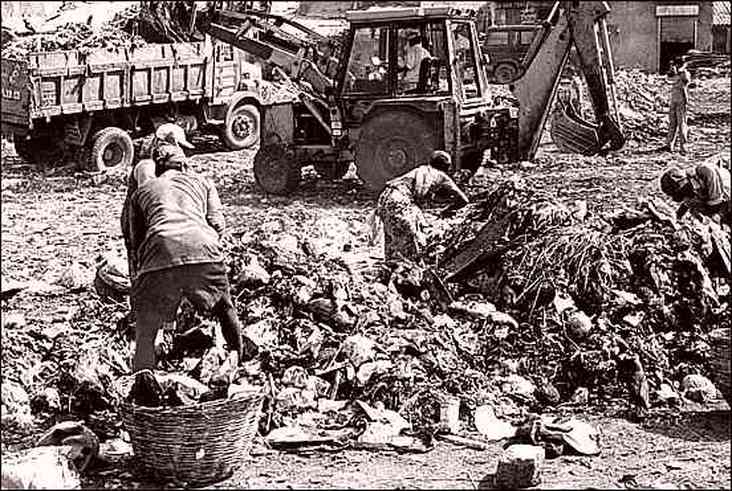 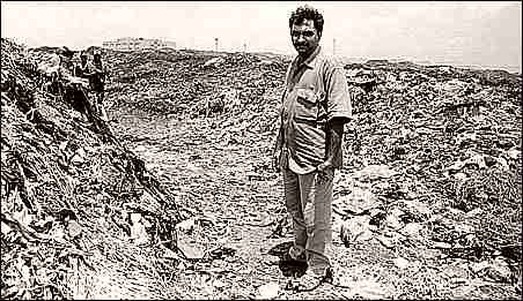 ﻿By custom, waste collectors are not permitted to travel in buses and other public transport, nor to enter public spaces such as restaurants because of the foul smell of their bodies. Without protection from masks, shoes, gloves or uniforms, they handle garbage and debris that includes animal carcasses, human wastes, rusted metal pieces, glass, hospital refuse and other toxic and dangerous wastes. Not surprisingly, they suffer serious skin infections, eye disorders, respiratory tract disorders and other injuries.
A waste collector at work unloading garbage at a Mumbai (Bombay) dump site ﻿ 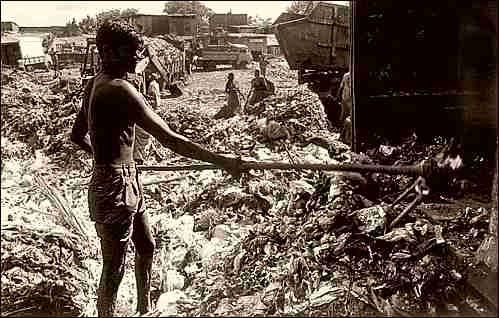 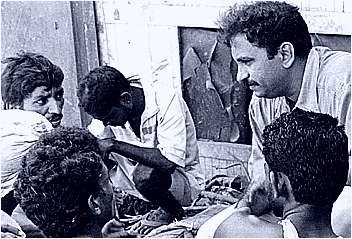 By helping waste collectors improve their health, welfare and bargaining power, Milind Ranade (right) is challenging the prescribed status of menial workers in Indian cities. To do this, he has launched a new kind of Indian labor union (Kachra Vahtuk Sanghash Samiti or KVSS): an autonomous, apolitical organization that is committed to the welfare of untouchable waste collectors who have been neglected by India's mainstream labor organizations. Milind Ranade meets with waste collectors 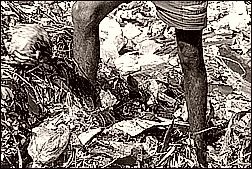 Waste collectors help move the more than 8,000 metric tons of refuse generated daily by Mumbai's residents and businesses. They have no choice about where, when and how they work. They ride on the trucks that haul garbage to dump sites, and are paid from 25 to 35 rupees (US$.05 to .07) per trip. They can complete two or three trips per day, working a minimum of 10 to 12 hours daily. There are no holidays or rest periods. Socially untouchable, scavengers are isolated from their employers as well. They are paid by the Bombay Municipal Corporation (BMC) yet they are not public employees. The BMC hires them as independent agents or through subcontracting agents. Procuring and controlling contract waste collectors is a corrupt and lucrative business that is monopolized by BMC employees. Waste collectors are paid in cash, but no records are maintained. No deductions are taken from their pay to provide benefits, nor for taxes. They receive no identity card and attendance cards.

Waste collectors are not insured and no protective measures are taken on their behalf. In most cases, when they have an accident they lose their salary during their forced absence and receive no compensation for the loss of earning capacity. They get no food, clean drinking water, or washing facilities from their employer, so they eat their food while riding on the garbage trucks.